What is the Gender Pay Gap?

The gender pay gap measures the difference in mean and median earnings (for pay and for bonuses) between all women and all men across an organisation, regardless of position held. Gender pay is different to equal pay. Equal pay is when there is no difference in pay between men and women who carry out the same or similar jobs.

The ‘mean’ is the ‘average’. The mean gender pay gap for salaries is found by comparing the mean female salary with the mean male salary, for which we look at the average hourly rate of pay of women and men at Leightons in April of the relevant year. The same calculation is applied to determine the mean gender pay gap for bonuses, but for this we look at bonuses paid over a 12-month period to April.

The ‘median’ is the ‘middle point’ and best understood by thinking in terms of a list. If we listed the salaries of all female employees in order of highest to lowest and did the same for all male employees, the median gender pay gap is calculated by taking the salary that falls in the middle of each list and comparing them. The same calculation is also applied to determine the median gender pay gap for bonuses paid, but for this we look at bonuses paid over a 12-month period to April in the relevant year.

What is our Gender Pay Gap?

The Gender Pay Gap figures for Leightons Ltd, based on April 2021, are as follows: 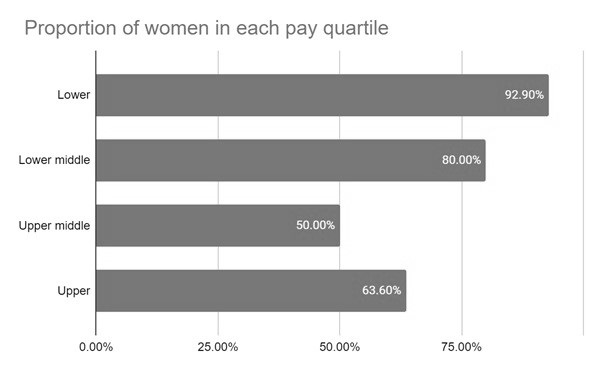 Whilst we seek to improve our gender pay gap, it is important to note that it is largely driven by a predominance of female employees in our lower quartile roles. This relates to societal factors and influences. If more men were to apply and commence roles within these quartiles, the gender pay gap and the bonus pay gap would reduce. We therefore ensure our recruitment process is free from bias and our advertisements are appealing to all.

As an organisation that employs more women than men, we are pleased to see that this is reflected in the highest quartile with a greater proportion of women than men in senior roles. That said, we remain committed to supporting diversity at every level of our organisation and helping people to progress in their careers with us.

“I confirm the information in this statement as required by the Gender Pay Gap Reporting Regulations is accurate.”